The newly painted wall of the West Montgomery cafeteria. 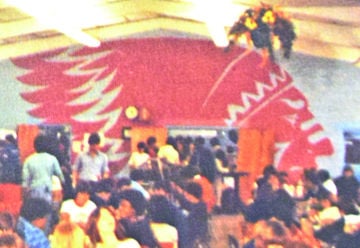 A photo from an old West Montgomery annual shows the Warrior head as it was in 1979.

The newly painted wall of the West Montgomery cafeteria.

A photo from an old West Montgomery annual shows the Warrior head as it was in 1979.

Facebook was ablaze last week when photos of the newly painted West Montgomery High School cafeteria were exposed on the social media site. The modernization of the facility had many local conspiracy theorists hard at work analyzing why the Warrior head on the front wall, the 9/11 memorial done by students after that tragic day in 2001 and the rest of the current and former students’ artwork had been covered by colors that are in no way related to the tradition of West Montgomery High School.

Some say the color scheme is associated with the recent decision by the Supreme Court to legalize gay marriage, some think the outcry by Native Americans over the Washington Redskins mascot is pushing local authorities to be politically correct.

But according to the administrators at the county office, the rationale behind the rainbow colors, that from the top down were red, green, blue and orange, was to modernize the cafeteria.

Galloway is the sports editor of the Herald. E-mail him at jgalloway@montgomeryherald.com.