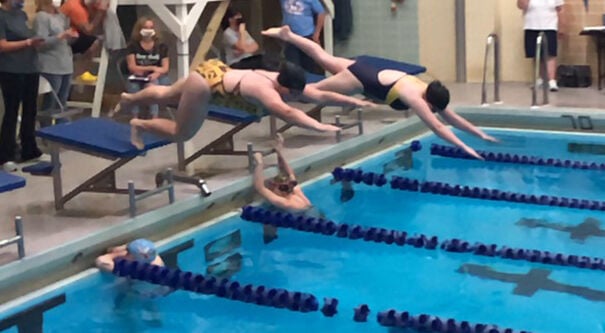 Julia Freeman and Paige Kern dive in to start their race.

Julia Freeman and Paige Kern dive in to start their race.

The Timberwolves boys’ and girls’ swim teams competed in the Rocky River meet on January 15, which served as the conference championship.

The boys finished in third with 203 points, and the girls finished fourth with 184 points.

The boys earned enough points to put them ahead of Forest Hills (78) and West Stanly (37), but just behind Mount Pleasant (246) and Central Academy, which won with 347 points.  Mount Pleasant won the girls’ meet with 332.5 points.

The times each swimer earned in the meet are what qualify them for regionals, according to head swim coach Jason Hensley.

For the full story, see the January 27 issue of the Montgomery Herald.